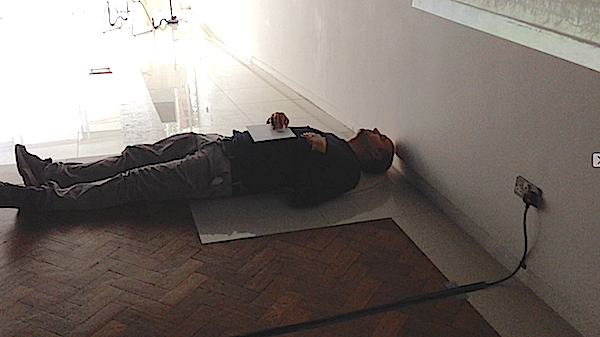 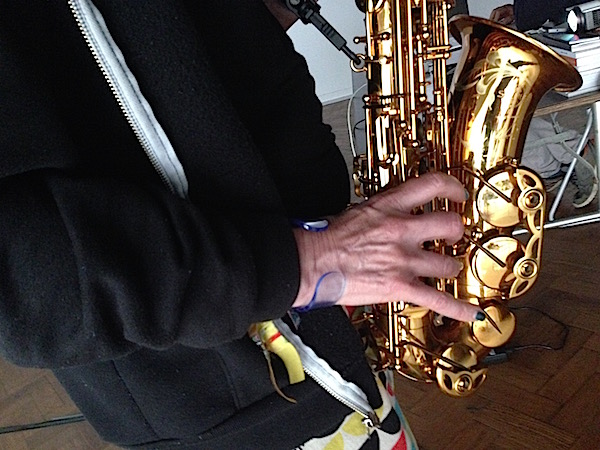 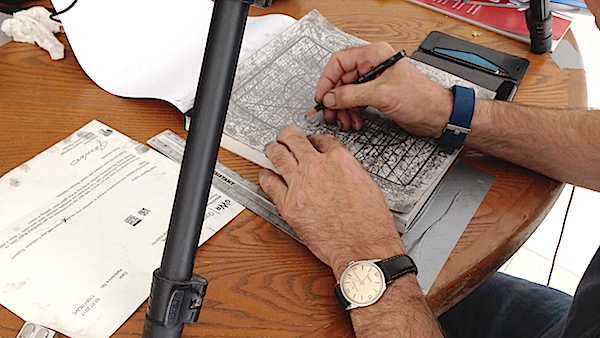 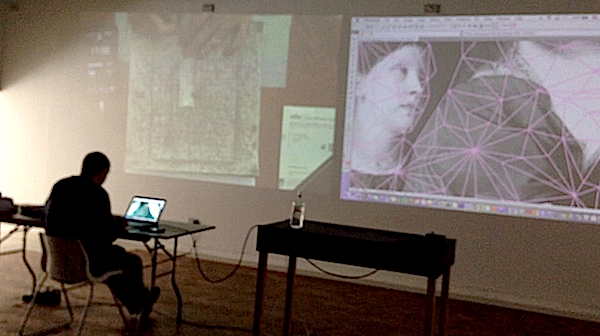 Three (artists) working in different disciplines improvised over a period of 8 hours – ‘a working day’ – punctuated with breaks.

The ‘investigation’ was based in part on practices common to the way a working day is formally structured – dislocated by breaks at specific points in the day and a collective pressure to complete tasks, each juxtaposed with each ‘worker’ responding to the others output.

The three artists arrived separately to the GallerySpace at 8am and set up their work activity for the eight hour ‘shift’. The three participants organised the gallery space with tables laid out as if ‘production lines’ and work benches, with projections and other displays of each artists ‘work in progress’.

The second element of the work day structure was less clear to see. The randomness of the improvised sound interventions of the saxophone, played by Annie Morrad, either coerced visual responses from Andrew Bracey and Steve Dutton or responded, influenced by the visual expressions evolving in the space.

The ‘painter’ Andrew Bracey, had selected a photographic reproduction of a classical painting from the National Gallery and tasked himself to digitally manipulate it until the transformation was unrecognisable yet contained all its original elements. On this occasion he used digital manipulation of the reproduction on a computer to replace his usual, more physically engaged, method of manipulating a layer of clear gesso on the surface of a photographic print. Steve Dutton set up his workstation to concentrate on analysing the ‘score’ of an image – tracing and deconstruction – marking out the structure of an image on a reversed mono print which was projected alongside Bracey’s digital manipulations. Occasionally Dutton escaped the confines of the gallery out into the street where he worked the graphite powder onto paper. Throughout, Annie Morrad’s saxophone sustained an abstract and unscored sound ’conversation’ with the other two artists and at one point connected through live streaming video with a ‘co-worker’ in Australia – exporting the work ‘internationally’.

The monotony of the 8 hour ‘shift’ was broken occasionally with visitors dropping by the gallery space to observe the event. For onlookers it was not easy to know whether to intervene in the performance. For the most part visitors wandered in and out of the space passively observing the three artists busy at their individual tasks. Limited conversation occurred during the  ‘comfort’ and food breaks of the “eight hour” day. The event came to a negotiated end when all the artists agreed they were mentally and creatively exhausted. It was time to figure out what had happened that day.