The global pandemic Covid19 in 2019/20 has forced us all to take a close and critical look at our behaviour, life styles and social systems and their impact on our planet Earth. This is not the first time we have been alerted to the fragility of our planet and all the life forms which call Earth their home. Many disastrous events have been ‘natural’ and many have been ‘man made’ – but whatever they are each one leads onto another and eventually it is difficult to distinguish between one or the other.

Many see no connection between environmental ‘man-made’ disasters which changed the eco system of the California coastline in 1970 and, 50 years later, the emergence of Covid19 – one being the result of a massive chemical oil-spill of 3 million barrels of crude oil dumped into the sea and the other being the chemical transition of a deadly air-bourne virus from animal to human. Initially these events may not seem connected but they are both the progeny of universal social and economic practices which give rise to ‘conditions’ that puts the world and all the life it supports into jeopardy.

The commemoration of the 50th anniversary of the Santa Barbara harbour ’oil spill’ worked to sustain contemporary actions around environmental issues. In the months before Covid19 appeared many of us joined marches and demonstrations concerned about detrimental climate change. Together with ETC (Eco Thames Co-op) we opened up a conversation and invited artists to respond to the current ecological issues being raised and, at the same time, mark the fiftieth anniversary of the Californian ‘Earth’ project. When Covid19 appeared on the horizon as ‘Earth’ progressed it was impossible to see the ‘Earth50’ project as a separate issue to this new pandemic. Everyone’s thoughts turned to excavating the roots of our problems and unravelling the butterfly effect. Before offering our comments, questions needed to be raised. Were these disasters predictable outcomes of the ecological and economic models now practiced by the majority of countries in the world? and if so why do we persist with such practice when the outcomes are predominantly disastrous? What is the criteria used to make decisions? What is expendable? Covid19 itself was appearing to be selective. Was this sinister selectivity designed for a societal system which required compatibility with a socio-economic model devoid of humanity?

Many of the works presented in ‘Earth’ were “pre-Covid” and could still reflect on the beauty of the planet – or just listen to it. Gazing at its immensity or focussing in on the detail: the panoramic views of cliff faces ‘painted’ over millennia, the minute perfection of a sweet pea’s petals, the barely audible humm of a worker bee, the screech of a gannet, the tolling of bells, and marking the incessant spin of earth’s journey through space. Social Distancing directives dictated that most of the works were shown in digital format, still and video projections and sound works, virtually accessible via a dedicated website. A number of smaller pieces were displayed in the gallery space.

Since the devastating oil spill 50 years ago in Santa Barbara, California has been a leader in restricting offshore oil drilling…. but commercial interests dictate cost cutting practices and the world has continued to experience commercially induced ecological disasters – from the massive to devastating local events: Exxon Valdez dumping of 11 million gallons of crude oil in Alaska, Chernobyl nuclear reactor explosion, Fukushima nuclear reactor meltdown, continued use of fossil fuels, cutting down the rain forests, increased use of agro-chemicals, building on flood plains, and pulverising the planet through fracking … Each action gnawing away at the delicate balance of the Earth’s ecology. This imbalance has led us into a future of pandemics…. The latest manifestation being Covid19 – what is the next and which could be the last?

AND’s ‘Earth50’ exhibition website will be maintained as a way to continue the conversation: 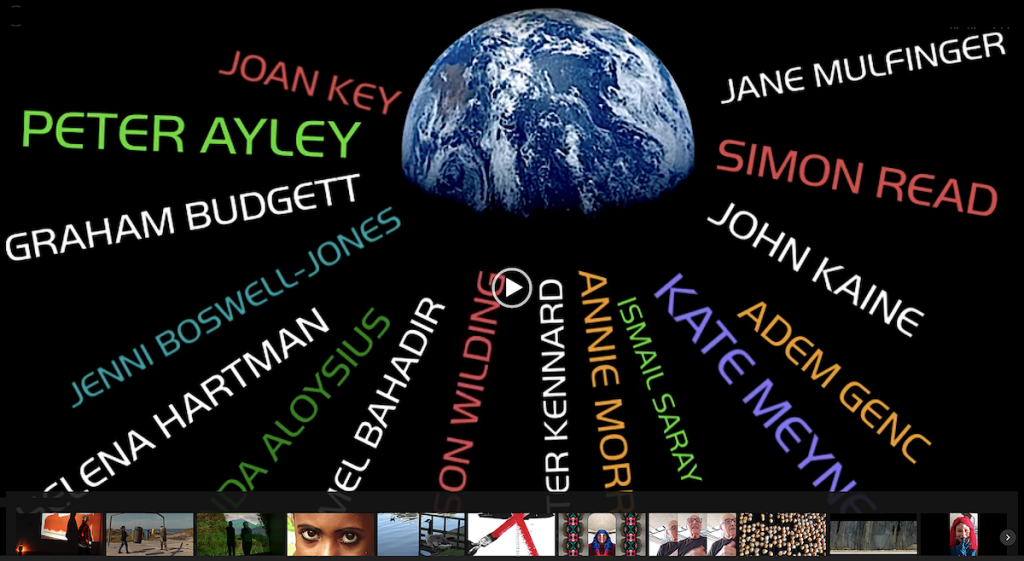